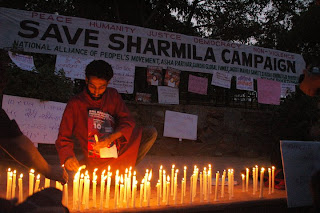 As per the scheduled program, a candle light solidarity prayer being organised at Rajghat on 25 June 6 PM to support Irom Sharmila Chanu under the Save Sharmila Campaign.

We convey our sincere thanks to all of you for your participation and great support.

People from all walks of life, from all age groups, from various states, from various civil societies and institutions (JNU, JMI, DU, Hamdard, AIIMS and IIT) came there to support the campaign. We also have received responses of Singhjeet (Irom's brother) through sms and call, and support of Taslima Nasreen, Pritish Nandy, Calamur, Nilim Dutta and Sudhir Tailang through their message on twitter.

You all made the event full of "unity in diversity" and encouraged us to move ahead with more energy and with more enthusiasm. It was more than our expectations and we feel that we have more hands now in this campaign. We also apologies, if you had any inconvenience and assure you to take care of it with your valuable feedbacks.

We convey our special thanks to Media Persons, who, without any formal invitation, were there to support us for a good cause. We also convey our thanks to administration who supported us by giving permissions and were present there during whole event.

We feel that a women, whose fast has crossed 10 years, is still ignored by government. We support the courage and patience of Irom, who is fighting on the Gandhian way of non violence, and set an example for others.We feel that every heart should have a pain on the issue of Irom Sharmila and everyone should support her to be heard on the basis of humanity.
With the Save Sharmila Campaign, candle light solidarity prayer, we all demanded from the government to take "initiative of talk" to save Irom's life.

Letters to PM, Chairperson of UPA, Leader of Opposition within this week.
Planned activities, the most recent, which is going to be in coming month.
·        A meeting in Delhi before (date will be announced later) to evaluate the progress and to plan for future activities.
·        A meeting in Doda, J&K on 24th July to announce National Committee of Signature Campaign to generate awareness and to get support for Irom Sharmila from all over the India. (Signature campaign 02 Oct to 10 Dec)
Information about other future activities will be circulated later.

We hope that our campaign will turn the situation. People will become aware about Irom's non violence struggle and government will start talk with Irom. We will continue our campaign with support from all of you.

Those who want to be associated with us in this campaign as a volunteer and/or to share responsibilities are most welcome. They can write us or call us any time and we will invite them in our meeting scheduled in next month.
Thanks again

Posted by Repeal AFSPA at 15:21 No comments:

A women Irom Chanu Sharmila been her hunger strike on 2nd November 2000  demanding an end to an Indian military law, the Armed Forces (Special Powers) Act, 1958 (AFSPA) to establish a secure and peaceful administration which can respect human values, humanism and human rights who is on long fast and adopted Gandhian way of non violent protest. Despite of the commitment to human rights she is still ignored by the government and civil society.
Save Sharmila Campaign formed in Initiative of several civil societies’ organization organized a candle light vigil at Raj Ghat today around 6.00pm in solidarity to Irom Sharmila. Introductory speech was given by Faisal Khan (National Alliance of People’s Movement), Veena Behen (Gandhi Global Family),Smt.  Nirmala Sharma  (Jagruthi Mahila Samithi), Prof VK Tripathi (Sadbhavna Mission), MD Tanveer (Asian Center for Social Studies) from Chennai , Sandeep Mishra (Mission Bharathiyam), Biju Behen (Asha Parivar –Assam), Syed Ali AKthar (Yuva Koshish) and Daiyan Husssain (Khadayi Kidmatkar- North East) delivered speech respectively in solidarity to Irom Sharmila.
Later on Akku Chingangbam a research scholar from JMI sang a song on Irom Sharmila. Activst of Qamar Intakhab, Rojesh a student leader of Manipur, Comrade M H Gandhi a well know activist from Gujarat, Shah Alam a documentary film maker, Samar Arya a student leader from JNU, Satyam (Rahul Foundation), Moulana Fateh Md Naqvi a well known religious scholar, many students from various universities (JNU, JMI, Jamia Hamdard & DU) and many activists and individuals participated in the vigil.
The main purpose of the vigil was to demand the government to hear Irom Sharmila, making an imitative by sending an all party delegates, NHRC and NWC to talk. The government has made many attempts of talks with Naxal, Mao and terrorist organization so why can’t it hear what a women from North East is demanding
Posted by Repeal AFSPA at 00:16 No comments:

Sent from BlackBerry® on Airtel

On the day Emergency was declared exactly 36 years ago, several civil rights groups plan to hold a candlelight prayer at 6pm at Rajghat on Saturday to support the 10-year-long non-violent protest of Irom Sharmila Chanu.

Read the Article at: http://m.timesofindia.com/PDATOI/articleshow/8957548.cms

** Disclaimer **
This is a public forum provided by TimesofIndia.com for its users to share their views with friends/public at large. TimesofIndia.com is not responsible for the content of this email. Anything written in this email does not necessarily reflect the views or opinions of TimesofIndia.com. Please note that neither the email address nor the name of the sender has been verified.

Posted by Repeal AFSPA at 21:21 No comments: 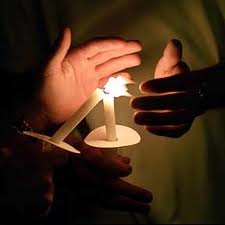 Dear friends,
As, You are aware that the fast of Irom Sharmila Chanu has crossed 10 years, with a demand to repeal AFSPA (Armed Forces Special Powers Act, 1958).

She was arrested based on the charges for attempt to commit suicide, criminalized as a high security prisoner and her access to family, friends, supporters and the media have been denied. It is a shame that in this land of Gandhi, a non-violent protester has been subjected to such humiliation for more than ten years.

AFSPA has already been regarded as a Lawless law and draconian law by various international agencies. United Nation has also expressed its concern over this law. Human Rights agencies have found that this law is continuously violating basic human rights and has led to increase in number of rapes, bonded labors & negative psychological impacts are its result.
Now, as a concerned citizen, it is our responsibility to respect and to protect human rights and values.

A candle light prayer is being organized on 25 JUNE at 6:00 PM at Rajghat, Delhi, to support the non violent protest of Irom Sharmila with a demand to “Save Irom Sharmila”.
Just bring a candle to favor the light of Humanity, Democracy, Peace, Justice & Non violence.
All are welcome.

Email ThisBlogThis!Share to TwitterShare to FacebookShare to Pinterest
Labels: CIVIL SOCIETY ON IROM SHARMILA, IROM SHARMILA, rajghat, REPEAL AFSPA
Newer Posts Older Posts Home
Subscribe to: Posts (Atom)
This is the official Blog of Save Sharmila Solidarity Campaign, a nation-wide campaign in support of Irom Sharmila and for repeal of AFSPA