A convention on Repeal AFSPA is scheduled on 1st November (2 to 5 PM) at Indian Social Institute, Lodi Road.  Activists from North East region as well as voices from all other regions are coming together to bring the issue in frontline of political priorities.

We invite you to learn and to enrich the session with your experiences, opinion and ideas in this convention. Please join the convention and support the suppressed voices to come on front.

You may consider forwarding this invite to your other friends and groups who wish to join the convention and who favor human rights.

During 2 to 5 session, you will listen many untold experiences, update about cases pending before judiciary, an understanding about present scenario etc and we all together may form a joint strategy to take this demand forward.  Few reading brochures and literature will also be available at registration desk. A signature sheet will also be there upon which attendees may out their signature to include their name in memorandum that will be send to Prime Minister, Home Minister and President. Hi-tea will be served at the end of program.

We are alsop organising protests in other cities as well. o know about all such events, pl keep visit www.repealafspa.blogspot.com

Detail of the convention is provided here:

Representatives from other Organisations

Irom Sharmila, a Repeal AFSPA crusader in Imphal, Manipur is completing 15 years of her hunger protest and will enter in 16th year of her hunger strike on 2nd November. She is continuously raising her demand through peaceful way of her fast, but state has ignored her demand and even did its best to suppress her voice. She is under arrest under section 309 of IPC with charges of attempt to suicide that is completely against her objective. Irom Sharmila was just 28 years old when she had started her fast with her hope in democracy. Now she is 43 years old, all her life behind the bars, just for her crime to sit peacefully and demand to Repeal AFSPA (Armed Forces Special Forces Powers Act), a special act that empowers armed forces to operate with extreme impunity. This act has resulted thousands of serious human rights violations including fake killings and rapes in states of north east region (through AFSPA 1958) of India and in J&K (through AFSPA, 1990). Despite all the demands from national and international human rights organizations and even from political parties and state leaderships, this act has not been repealed yet.

On completion of 15 years of her hunger protest, we are observing a nationwide joint protest where people and organizations in various states are registering their voice to support cause of Irom Sharmila. In this series of solidarity, we are organizing a Convention on Repeal AFSPA at New Delhi on 1st November to raise voice, to analyse and update about cases pending before judiciary and government and to take future course of action.

Posted by Repeal AFSPA at 14:32 No comments:

On 2nd Nov 2015, Irom Sharmila is completing her 15 years of hunger strike in demand to Repeal AFSPA. Many national and international organizations already raising their voice in her support and to demand repeal of AFSPA from all regions as this act is a major cause of human rights violations in North East and in J&K since last many years and hundreds of fake killings, rapes, disappearance and torture cases have been reported. But nothing could be done as under AFSPA, security personals are free to shoot to kill with unchecked powers. 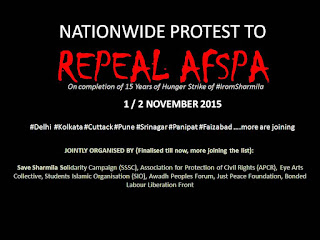 Irom Sharmila is demanding repeal of this act through her peaceful hunger strike. Governments have ignored her fast and did not even come forward to talk with her, instead lodged her in jail under section 309 of attempt to suicide. It is when even govt owned panels recommended to review/ repeal of this controversial act and hunger strike of Irom has become world's longest hunger strike.

To mark 15 years of completion of hunger strike and to salute her spirit to fight for this cause, SSSC along with many other organizations and activists are calling a Nation wide Protest to repeal AFSPA.

We are inviting all organizations to collaborate with us and to make it a join effort.

On 1ST / 2nd Nov, we all may do one or more things in our cities to express our solidarity :

·         Observing one day hunger strike in solidarity with struggle

We invite you to do anyone or more activities from above, you may send details about you/ your organization at savesharmila@gmail.com  to include name in the list or organizers. List of cities and programs will be regularly updated on this event page along with names of all organizations and individuals who will join efforts.

Posted by Repeal AFSPA at 11:26 No comments:

Irom Sharmila appeared in the Delhi Court on 6th AND 7TH October for the trial of the 2006 Jantar Mantar Case where Delhi Police lodged a case against her in section 309 of attempt to suicide. During the hearing, she reiterated her truth that she is not committing suicide. She is not taking life; instead she is appealing to protect the right to life. In the hearing, she also reiterated the undemocratic and draconian effects of AFSPA and appealed for its repeal. SSSC volunteers met her during her court appearance.

SSSC considers these hearings as a way of suppression of voices of human rights. Everybody knows that fast of Irom sharmila is for a public cause, yet lodging her in jail with the reason of attempt to suicide , is a judicial failure and disrespect of human rights of world's largest democracy. As Irom Sharmila also said in her statement, that at a time when India is advocating to ensure its permanent seat in UN, continuing with laws like AFSPA is extreme contradiction.  Ravi Nitesh, Convener of Save Sharmila Solidarity Campaign told that If India is really serious to be known at global level with powers to take part in policy making and advisory for global issues through UN, it must have first and primary requirement of respecting human rights. SSSC supports Irom Sharmila in all her endeavor and struggle.

It is known through reports of government-appointed committees and national and international human rights' organisations that AFSPA is discriminatory and a kind of unconstitutional and harsh act that provides extraordinary powers to security forces in disturbed regions, without asking for any accountability. These unstopped uses of powers by security forces have been used in serious situations of violations of human rights. By this act, security forces start behaving like criminals who have unchecked powers and accountability.

Save Sharmila Solidarity Campaign, that is continuously working since last many years against AFSPA also advocates for its repeal from all areas. The campaign keeps its faith upon non violence struggle of Irom Sharmila and considers her as its leader. SSSC has worked nationwide in last years to highlight struggle of Irom Sharmila and have organised numerous events, public demonstrations and other activities in almost all states of India and in few other countries to advocate Repeal of AFSPA from all regions, including state of North East Region and of J&K, SSSC believes that its struggle is against state repression that anyone can see through AFSPA that is imposed in J&K and states of North east region, and therefore struggle will continue against all human rights violations by security forces in these regions. 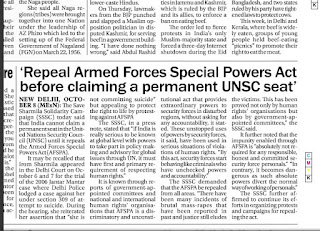 There have been many incidents of brutal mass-rapes that have been reported in past and justice still eludes the victims. This has been proved not only by human rights' organisations but also by government-appointed committees.

We demand with the government to immediately pay attention towards AFSPA repeal. Keeping AFSPA in Manipur and in J&K is against the will and future of state. We demand with state and central government both to coordinate and cooperate with each other to end the impasse over AFSPA. For Manipur, state leadership of central ruled party was already promised repeal of AFSPA.

SSSC believes that AFSPA that was extended to J&K vide AFSPA-J&K, should be repealed as victimisation and sufferings cannot be looked separately. A human rights violation is always a violation of human rights regardless of region. in J&K, so many incidents of killings, rapes and disappeances have already been reported and evidences were provided even before courts against many security officials, but due to impunity under AFSPA (section 7), nothing could be done against culprits.

SSSC also see that enjoying such an impunity that AFSPA provides is actually a corruption and it is absolutely not required for any responsible, honest and committed security force personals. In contrary, it becomes dangerous as such absolute powers divert the normal way of working of personals.

SSSC appeals with the state and central government to immediately act upon this long pending demand of Repeal AFSPA. AFSPA is a failed law.

The demand to repeal AFSPA is not only at national level but also at a global level with international human rights' organisations and activists advocating for it. At this time when India is being honored globally, this undemocratic and inhuman act is also working to tarnish this image.

SSSC will continue its efforts and will be organising protests and active campaigning in coming months for advocating Repeal of AFSPA from every where.

For any queries, contact Ravi Nitesh at savesharmila@gmail.com or 9958907799