AFSPA EXTENSION IN NAGALAND IS FAILURE OF GOVERNMENT : SSSC

AFSPA EXTENSION IN NAGALAND IS FAILURE OF GOVERNMENT : SSSC
Published at:
http://www.nagalandpost.com/ChannelNews/State/StateNews.aspx?news=TkVXUzEwMDA4MzE5Mg%3D%3D
http://www.countercurrents.org/sssc120715.htm
http://www.assamtimes.org/node/14172
http://kanglaonline.com/2015/07/press-release-afspa-extension-in-nagaland-is-failure-of-government-sssc/
http://morungexpress.com/afspa-is-nothing-more-than-the-surrender-of-democracy/
http://thepeopleschronicle.in/?p=13762
http://www.hueiyenlanpao.com/headlines/item/32801-extension-of-afspa-condemned
http://e-pao.net/epSubPageExtractor.asp?src=news_section.Press_Release.Press_Release_2015.AFSPA_extension_in_Nagaland_is_failure_of_Government_20150713
Delhi, 12 July 2015.
Recently , AFSPA was extended for another term in Nagaland. It is not only unfortunate and condemnable, but it also shows that how much incapable government is.
Everyone know that AFSPA is discriminatory and a kind of unconstitutional and harsh act that provides extraordinary powers to security forces in disturbed regions, without asking for any accountability. These unstopped use of powers by security forces have been used in serious situations of violations of human rights. By this act, security forces start behaving like criminals who have unchecked powers and accountability.
Save Sharmila Solidarity Campaign, that is continuously working since last many years against AFSPA advocates for its repeal from all areas. Campaign keeps its faith upon non violence struggle of Irom Sharmila and consider her as its leader. SSSC has worked nationwide in last years to highlight struggle of Irom Sharmila and have organised numerous events, public demonstrations and other activities in almost all states of India and in few other countries to advocate Repeal of AFSPA from all regions, including state of North East Region and of J&K, SSSC believes that its struggle is against state repression that anyone can see through AFSPA that is imposed in J&K and states of North east region, and therefore struggle will continue against all human rights violations by security forces in these regions. 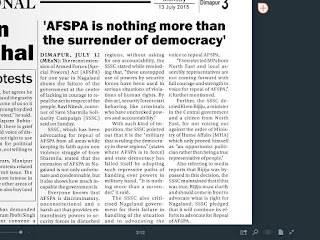 ​
SSSC see that extension of AFSPA in Nagaland shows that despite clear verdict in centre, BJP shows itself as weak political party and does not have courage to repeal the act in respect of people. It seems that it is military that is ruling the democracy in these regions and state democracy has failed itself by adopting such repressive paths of handing over powers in military hand. It is nothing more than a surrender. Also, state government of Nagaland is similarly incapable in handling of situation and in advocating the voice to Repeal AFSPA. Even elected MPs from North East and local assembly representatives are not coming forward with full courage and strength to voice for Repeal of AFSPA.
We also condemn that Kiren Rijiju, a minister in Central government and a citizen from North East, also has not come against the order of MHA and by this way, he only proved himself as an opportunist politician rather than being a true representative of people. It was also told in media reports that probably Rijiju was bypassed in this decision, however if it is true, Rijiju must clarify and should come in front to advocate what is right for Nagaland.
Ravi Nitesh, convener of SSSC told that SSSC appeals with the government to re consider its orders and to adopt measures and strategies that can save people of AFSPA imposed region from human rights violations. SSSC will continue its efforts to advocate for Repeal of AFSPA.
--
Regards,