Protest organised at Jantar Mantar against Ramban Massacre of J&K

On the appeal of Save Sharmila Campaign and Mission Bhartiyam, a protest was organised against the Ramban Massacre by BSF that claimed 6 lives and injured 44 others, at Jantar Mantar, New Delhi.

Save Sharmila Solidarity Campaign is a nation-wide campaign in support of Irom Sharmila and for the repeal of the draconian law of AFSPA. For two years, it has been working to spread awareness, mobilise support and generate political pressure to repeal the law. It is an umbrella of many civil society organisations. The protest was joined and supported by many progressive groups namely AISA, Campus Front of India, Jamia Teachers' Solidarity Association, Jamia Students solidarity, NCHRO, RYA, PUCL, J&K RTI and PUDR among several others. 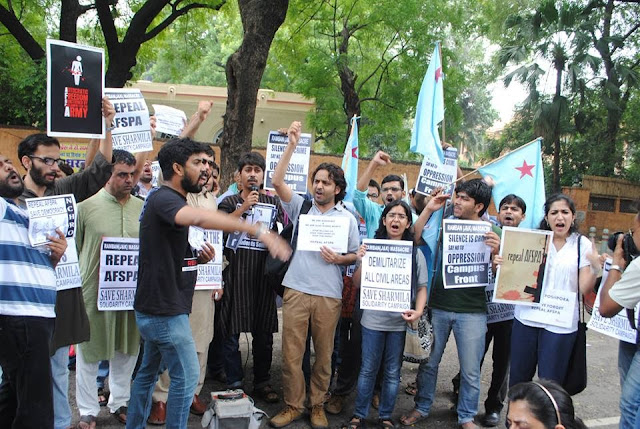 The BSF had opened fired on a mob that was protesting against the alleged manhandling by BSF personnel of a local imam, followed by the reported desecration of the Holy Quran the previous night. The following morning, a group of protestors had reached a BSF post in Gool in Ramban district and they were responded with a massacre.

But as this was not the first incident and laws like AFSPA will ensure that it may not be the last. Thus, the protest was organised to demand:

*A speedy inquiry, within a given time frame
*Prosecute the guilty
*REPEAL AFSPA and other similar draconian laws
*Remove all the military forces from civilian areas of Kashmir 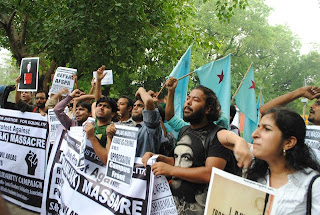 The Protestors had marched on the Jantar Mantar road, shouting slogans and holding placards. But police force were deployed and road was barricaded so protestors went till barricades and then sat there for at least two hours. They shouted slogans and many people voiced their concerns and opinion on the issue. A large number of people from J&K and North East had participated. The speakers were from various organizations and included Ravi Nitesh from Mission Bhartiyam, Mohd Tanveer from NCHRO, Amit, Sandeepan and V Arun from AISA, Dr Muzaffar Bhat from J&K RTI forum, Piyush from JNSU, Hemant from DSU, Talha Huseyn from Campus Front, Asad Ashraf from JSS, Manjit from PUDR, Guneet from PUCL, Dar Rashid a Human Rights lawyer from J&K and Devika Mittal from Save Sharmila Solidarity Campaign and some other activists and student leaders.

“The Ramban incident is a prima facie case of coercive method adopted by the security personals. It highlights the highhanded attitude of the security forces that they have acquired over a period time due to their absolute powers and the impunity granted to them”, said Ravi Nitesh, founder of Mission Bhartiyam. 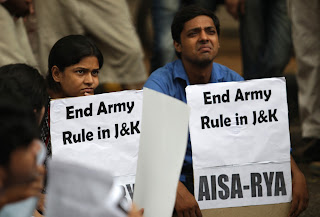 “There is a long list of incidents where security personals of almost all wings have violated the human rights in J&K.  There have been fake encounters, torture, rapes etc. in the state but nothing has been done to prosecute the culprits till now. So there is every reason to believe that like other similar incidents before, there will be no action taken by the government against security personals in Ramban massacre too. In such situation the only option left for the democratic forces to raise voice against such injustices”, said Mohammad Tanveer of Campus Front of India.

Dr, Muzaffar Bhat of J&K chapter of RTI pointed out that, “This incident happened in Jammu which is seen to be more “peaceful”. So there cannot be any justification. It shows that the entire Kashmir is under attack."

Devika Mittal of Save Sharmila Solidarity Campaign talked about these incidents to be frequent in Kashmir and states of North East. “It is shameful that these incidents are happening in the World’s largest “democracy”. It is shameful that these killings are justified in the name of upholding the ‘integrity’ of the nation. We feel that development, basic civil rights, basic amenities and justice should be used to uphold the ‘integrity’ not torture.", she argued.

The protest was supported by renowned Activists like Gautam Navlakha, Prashant Bhushan, Manisha Sethi, Dr Sandeep Pandey and many others.

The protestors will submit a memorandum with the above-mentioned demands to the Prime Minister, to the Ministry of Defense and to the Home Ministry.

Email ThisBlogThis!Share to TwitterShare to FacebookShare to Pinterest
Labels: Ramban Massacre
Newer Posts Older Posts Home
Subscribe to: Posts (Atom)
This is the official Blog of Save Sharmila Solidarity Campaign, a nation-wide campaign in support of Irom Sharmila and for repeal of AFSPA