New Delhi: Irom Sharmila, the Manipuri activist who has been on a hunger-strike for 14 years now with repeal AFSPA (Armed Forces Special Powers Act), appeared for the hearing at Patiala House Court, New Delhi. She was produced here in a case where she sat on fast on Jantar Mantar, New Delhi in the year 2006, but was charged under 'Commit to suicide' case as per section 309 of IPC.

The matter was scheduled in court room no 20B at serial number 27th in the court of Metropolitan Magistrate Akash Jain. Sharmila was produced in heavy security of police and most of the supporters were not allowed to reach till court room as soon as she arrived in campus. Even the supporters who were already in court room, later pushed by police away from court room.

Hearing was started in first half of the day at around 11.50 AM, however in between due to lunch hours of court, hearing resumed again at 2 PM.

In today's hearing, two witnesses' statements were recorded. In the next hearing which is scheduled for 17 July, other evidences will be examined. The judge had ordered for the exemption of the physical presence of Irom Sharmila and suggested that she may be represented by a counsel But she objected to it and said that she will appear for all hearings as she is fighting for truth.

The judge had stated his above-mentioned orders and said that she can leave but Irom Sharmila told that she wants to speak. She negated the charge of suicide as she remarked, "I love my life". She said that she has been fighting for basic fundamental rights prescribed by the Constitution of India for the people of North-East.
To this, the judge responded that he understands but he cannot say anything about this issue. He said that he will try that this case gets completed at the earliest and justice be given.

After this, Irom Sharmila was detained again. 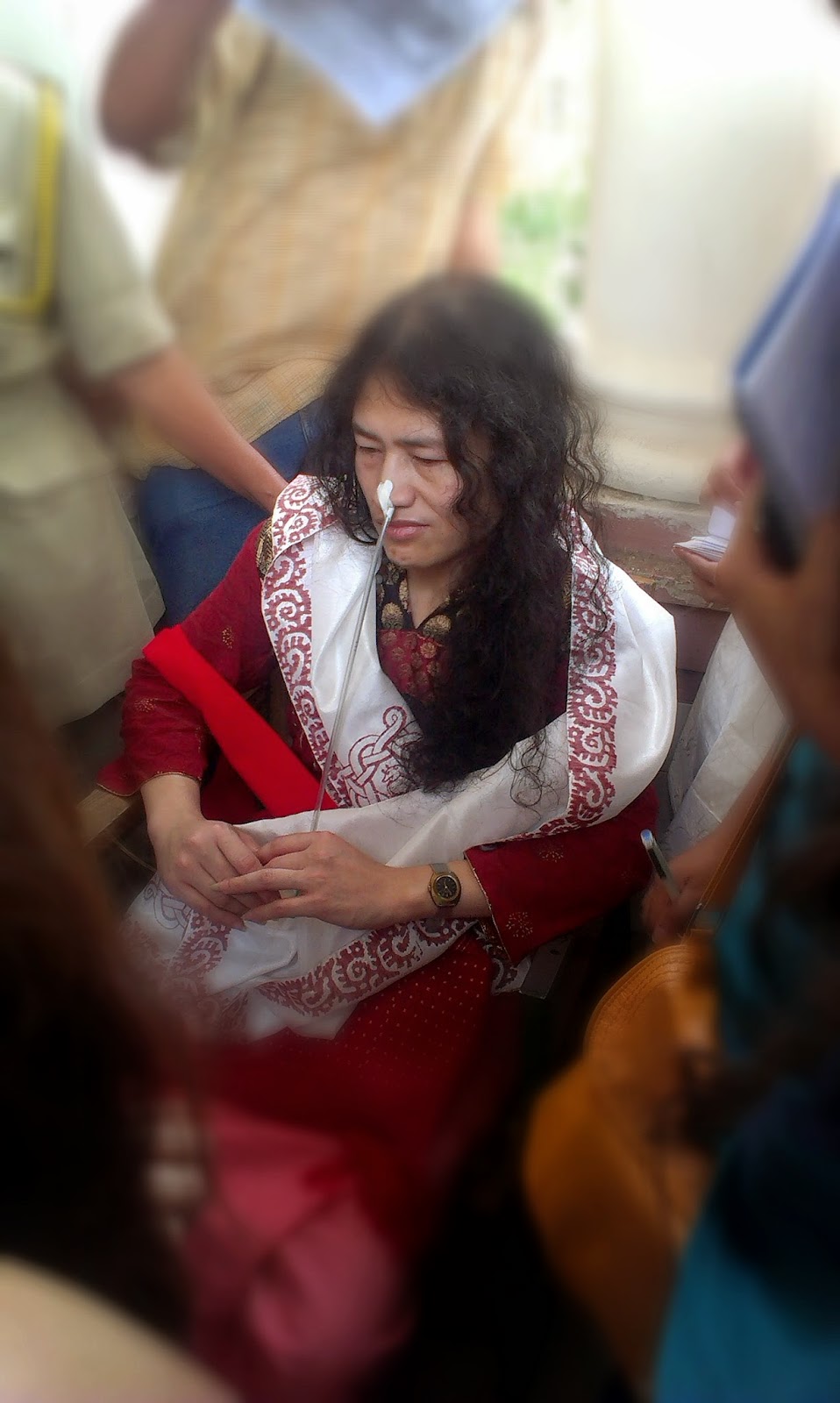 During the lunch break, with the help of advocates, Irom Sharmila was allowed to meet her supporters and media. Members of her support groups including SSSC (Save Sharmila Solidarity Campaign), MSAD and NEFIS were there. Chinglen from NEFIS talked to her rergarding the struggle and that they are all with the truth. Prof. V.P. Srivastava, Mahtab Alam and members of SSSC had talked to her in general and expressed their solidarity with her and also briefed her about the ongoing events to strengthen the voice in support of her and against AFSPA.
For SSSC, Ravi Nitesh had received a message written by Sharmila that will be included in the upcoming e-book that comprises articles and stories received to SSSC from across India in support of Irom Sharmila and in solidarity with her struggle to Repeal AFSPA. Seram Rojesh, an activist and research scholar was also present and assisted her with all translation and other support.

Few supporters had also met her yesterday after she reached Delhi, at her guest house. They talked in general and expressed their solidarity with her. Some of them included activist and research scholar Seram Rojesh, student Activist Hidam Peter, research scholar Jyoti Thakur, Abita from MSAD and others. From SSSC, Ravi Nitesh, Devika Mittal and Pankaj Pathak had met her and expressed their solidarity with her. They were present today in the court as well. During the interaction, Irom Sharmila had shared three of her poems.

Everyone who was around in the court, including policemen seemed sympathetic and respectful towards her. She looks little hopeful from present government if AFSPA will be repealed.

Save Sharmila Solidarity Campaign in view of all these ongoing events demands the Government of India to pay immediate attention towards the Sharmila's hunger strike. SSSC demands that:

1. Charges of 'commit to suicide' must be taken back and she must be set free. Her fast is for the life, and not against life in anyway, also it is for the society and not for any personal reason. With the interim relief, Government must order to remove charges of 309 (attempt to suicide case) from New Delhi and Manipur both places and must set her free to meet people like any normal citizen can.

2. Also, as everyone has some expectation from change of government, SSSC appeal to the Govt of India to take concern of the plight of common people of Manipur who had also showed their trust in govt by their vote and that on the reasons of 'justice' as well as for 'welfare' and 'trust building', it must repeal AFSPA at the earliest.

3. The Govt of India, must meet officially with Irom Sharmila to convey its initiatives in this regard.

SSSC is writing letters to Prime Minister and Home Minister for the same.