Save Sharmila Solidarity Campaign (SSSC) welcomes the decision of peace accord between Govt and NSCN (IM). By this historic peace accord, there are many signals from the side of the government, first of all it conveys the importance of peace and the commitment for development in North East states where the Prime Minister himself was present during peace accord with NSCN(IM) leaders.

SSSC believes that such actions from government are one of confidence building measures where not only common people of north east, but even insurgent groups and their members can now think and can join the mainstream in the broader objective of peace and development. 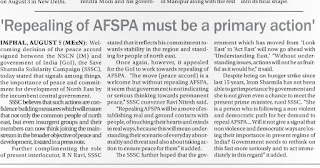 SSSC commends the role of R N Ravi for reflecting his commitment towards stability in north east and for standing towards people of north east. Being an interlocutor for these talks, he successfully brought both the parties at single point of joining hands.

With all these best wishes and congratulations, SSSC appeals once again with the government of India to work towards repeal of AFSPA. SSSC convener Ravi Nitesh said that though the move is a welcome but without repealing AFSPA, it does not seem that government is indicating or serious thinking towards permanent peace. In fact, no restrictions or cut in unconstitutional powers of military is actually a threat, not less than the threat of insurgents in north east states. Establishing peace talks and ceasefire deals with insurgents is about ensuring the development and scenario of investment by private parties that government is seeking, but repealing AFSPA will be a move of establishing real and ground contacts with people, of touching their hearts and minds in real ways, because this will mean understanding their scenario of everyday abnormality and threat and also about taking action to ensure peace for them. We hope that from Look east to now Act East, has to move ahead with Understanding East. Without understanding issues, actions will not be as fruitful as it would be."

We have seen that how despite being on hunger strike since last 15 years, Irom Sharmila has not been able to get importance by government. Even despite her repeated requests and desire to meet newly elected prime minister Mr. Modi, she did not get any chance to meet him. She is a person who is following a non violent and democratic path for her demand to repeal AFSPA. Despite her worldwide popularity and voice and support of human rights organisations, government has not listen demand yet. Moreover, her fast has largely been ignored. Will it not give a signal that non violence and democratic ways are loosing their importance in present regime of India? Government need to rethink on this fast more seriously and to act immediately in this regard.