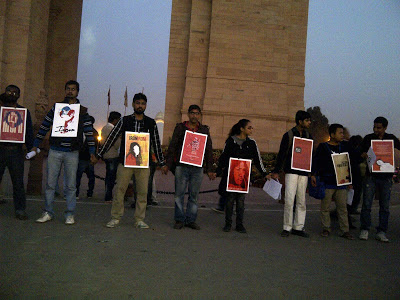 On 10th December, the world observes the International Human Rights Day and talks about protection and promotion of human rights. But here, in New Delhi, on the eve of Human Rights Day, a human chain was formed to showcase the plight of Irom Sharmila and the human rights violation caused by heavy militarization and the draconian act of Armed Forces Special Power Act or AFSPA.

On the eve of Human Rights Day, volunteers of Save Sharmila Solidarity Campaign(SSSC), a nation-wide struggle to protest against the neglect and suppression of Irom Sharmila, a Manipuri human rights activist who has been on a hunger strike against AFSPA in Manipur for 12 years now, organized a human chain to at India Gate at 5 PM. SSSC appeals to the Government to open talks with her. For over a year, SSSC has been organizing public demonstrations, candle-light vigils, signature campaigns, caravans and awareness programmes in colleges across the nation and beyond.

The motive of the human chain was established by the organizers. Ravi Nitesh, one of the organizers, remarked that it is "a way to spread the word among the citizens about a fellow citizen. Irom Sharmila has been struggling for 12 years to argue for rights which are given to everyone else in the country". 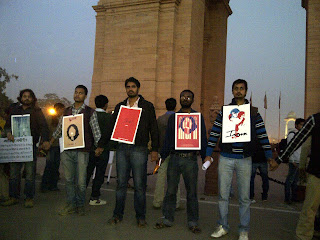 To this, Mohammad Tanveer added that, "She is not just a citizen but a truth democrat. Her ongoing struggle shows her faith in the democratic institutions of the country. But the Government has chosen to neglect her non-violent and democratic voice. We ask why?"

Shaheen Muhammad, another organizer, argued that, "When the Government can talk to naxals and terrorists. Why can't they talk to someone who has been on a non-violent struggle for rights of people? It is shocking that in these 12 years, the Government has not sent even one delegation to meet her.

Pankaj Pathak stated that, "On human rights day, this human chain symbolizes another blot on the World's largest democracy.  We support Irom and her struggle as we believe that every citizen of this country deserves the same rights and privileges."

Another volunteer, Shekhar Jain, argued that, "For over a year, we have been organizing activities to spread the word about her struggle and we have hardly come across a person who has been unsympathetic towards her struggle and her people. So the logic of the Government that people are unsympathetic and insensitive towards North-east states is quite a myth."

Even here, when the human chain was formed, many from the crowds joined them. The volunteers had also distributed pamphlets with basic information on her and her struggle.

One of those who joined the chain remarked, "I was shocked to hear about her. This is unimaginable. How can someone be on a hunger-strike for 12 years? This Government is insensitive and discriminatory."

"It is true that we have always been so ignorant about the North-East but this does not mean that we are insensitive. This is really shocking that such a thing is happening in our own country. Why do we blame other countries for human rights discrimination then?" added another.

A college student commented, "Is this the reality of a diverse nation? We are one and we must enjoy equal rights".

The Human chain turned out to be another mechanism to gather support for Irom Sharmila and give her the hope that she is not alone in her struggle.

Posted by Repeal AFSPA at 21:12 No comments: