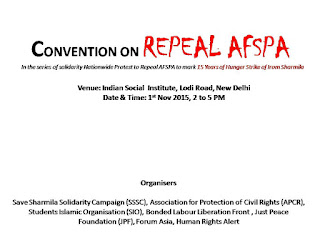 A convention on Repeal AFSPA (Armed Forces Special Powers Act) was organized here on 1st November at New Delhi today with the objective to bring demand of Repeal AFSPA in political priorities.  This convention was organized in view of its importance as IromSharmila, better known as Iron lady of Manipur is completing 15 years of her hunger strike with the demand to Repeal AFSPA.

A short film presented by the Extra Judicial Execution Victims Families' Association (EEVFAM) said that in 2012 they had present 1528 cases of killings by the armed forces in Manipur, to the Supreme Court. The apex court picked six cases at random to be investigated and found the army version to be false. The film said that since these cases reached the court, the number of extra judicial killings came down from 500 in a year to 2 in 2013. However, there is concern that if the court does not expedite the other cases, the killings could go back to their former frequency. Families and witnesses, too, need to be protected and rehabilitated, as the film showed the widow of a man slain by the army talking about the pressure the latter was putting on her to withdraw the case.

IromSharmila, a woman from Manipur is completing 15 years of her hunger protest on 2nd Nov. She is observing fast as a form of protest since the year 2000 (when she was about 28 years old), and she had started it just after Malom massacre where Assam rifles had fired upon local civilians who were waiting at a bus stand in Malom, Imphal (Manipur) and all were killed. Irom decided to register her protest because incidents of torture and killings were common in Manipur and in the veil of the powers under AFSPA,nothing could be done against culprit security personals. Iromsharmila started her fast and did not leave it since then. She has only demand, Repeal AFSPA, as it is AFSPA that is main culprit , because it provides extra ordinary powers to security personals to operate in Manipur and other such areas and these powers have been misused widely.

AFSPA has provisions of shoot to kill mere on probability, but it does not stop here, instead it goes beyond and says that no case can be lodged against any security personals without pre sanction from central government. Sadly, in all such years, no approval was given by central government and despite hundreds of reported cases of fake killings, torture and rapes, nothing could be done to punish culprits.

As, IromSharmila did not leave her fast, Manipur police registered a case against her under section 309 of 'attempt to suicide' and put her in jail. During her release from jail for a day in 2006, IromSharmila came to Delhi, paid tribute to Mahatma Gandhi at Rajghat and later joined a fast at JantarMantar. Delhi Police also registered another case under same section of attempt to suicide here in Delhi and matter went to court. Presently, IromSharmila is under arrest by Manipur police and living her life in security ward of JLN hospital of Manipur.  The case in Delhi also, is still going on and IromSharmila appears before Delhi court on court notices and when Manipur government becomes ready to produce her at Delhi.

Despite her fast since last 15 years and government's ignorance, even suppression through lodging her behind bars, did not break her faith in democracy or non violence. She always smiles, and tells , 'I have faith in democracy. Government will listen one day'

Sadly, government is not listening, and even one of her demand to meet Prime Minister Narendra Modi has not been accepted yet. She thinks Prime Minister does not want to meet her as probably government has no reply for all her demands and questions about suppression of people through AFSPA.

This act, AFSPA as one of the most draconian one that is not only dangerous to people, but even damage the reputation of security forces and of world's largest democracy that is advocating for UNSC seat.

Govt's own committees have recommended to repeal this act. Even many fake killings, rapes and cases of disappearances were not only reported but even proved, but till now govt has not repealed this act. Many national and international human rights organizations also raising their voice to demand to repeal this act. State leadership of BJP in Manipur and PDP in J&K had favored to repeal of this act, but now they are silent.

Neingulo Krome , Secretary General of NPMHR said "AFSPA is a violation of Human Rights and if India is truly a democratic country then this Act should be removed immediately. He also described about cases that are before Supreme Court against human rights violations" 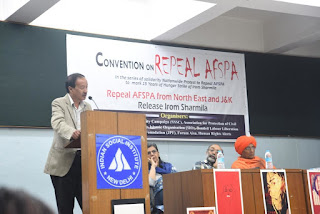 Babloo Loitongbam , a human rights activist from Manipur emphasized that this law has no place in a democratic country like India. This process needs to stop because it violates democracy to its core.  He also said that we need to move our struggle in such a way that we should be able to celebrate IromSharmila's victory in her struggle and even if Govt of India accepts her demand, it will be a victory of govt itself as it will send a message that govt respects for human rights.

Swami Agnivesh said he will lender all his support to the youth of this country in this struggle to repeal AFSPA from J&K and the North Eastern states of India. He also said that it is painful to see that religious groups raise voice when something happen to any member of their religion, but why don't they speak upon such isues where laws like AFSPA are violating human rights with all acceptance and permission by govt. Are not speaking for these acts are also a thing that religion should call for. 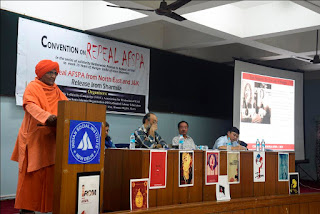 Prof Deepti Priya Mehrotra, who has also written a book on IromSharmilatitled 'Burning Bright'said, "Sharmila is the voice of ordinary people. Let the 21st century be the century of Sharmila." She also emphasized that it is only through solidarity that different voices are joined together and this is the only way in which we can stand up and fight for it. she practices non-violence "philosophically" not strategically. Her's is the declaration that life cannot be lived unless the state accords an equal right to life to all its citizens, said Mehrotra. 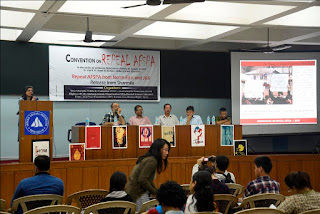 Prof Nandini Sundar talked about the Irom Sharmila Scholarships started by Delhi University three years ago and how to make them more effective. She read out the testimonies of two anonymous students who had applied for the  scholarship–for students from AFSPA affected areas–a man from Manipur, and a woman from Kashmir. Both accounts spoke of coming terrifyingly close to death at the army's hands, and its impact on one's mind. 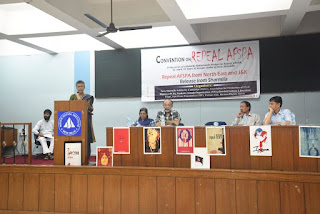 Prof Sanjoy Hazarika described about how this struggle is all about 15 years of Irom Sharmila, 10 years of Jeevan Reddy Committee and many others and therefore we must see that something is happening about which we all need to be concerned upon.  Sanjoy also said that future strategies should be developed and AFSPA is required to be repealed. He elaborated this psychological impact, talking about generations living with trauma and mental health problems wherever there was AFSPA. What was telling was the absolute lack of medical help available to these people. 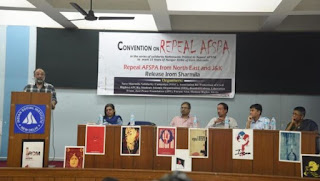 From APCR, Kashif Ahmed Faraz feels, 'People are now much aware of this issue and are coming up to fight for it. But we shouldn't stop here. We should continue spreading awareness about it…"

Raghu Menon from Forum Asia told that forum Asia is always in support of struggles for Human Rights and we have already extended our support to IromSharmila and we will continue to raise voice though all possible means. 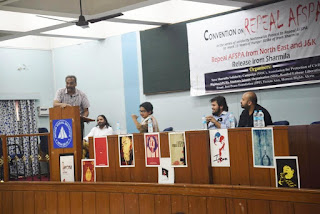 Henri Triphange, chairperson of Forum Asia also joined the convention and expressed his solidarity on behalf of organization.

The session was concluded by Ravi Nitesh who said that he has seen a lot of change in these fifteen years. Earlier only the North East people were fighting for it but now more and more people from all over the country are standing up in support of IromSharmila.

At the end, it was announced that demand to repeal AFSPA is a collective struggle and demand that is very much required to protect human rights as well as democratic values. It was announced that this full week is being observed in solidarity with 15 years of struggle of IromSharmila nationwide and at many places protests are happening.  It was also told that in coming months, this movement will bring more voices together and will start a big movement to demand Repeal AFSPA.

Posted by Repeal AFSPA at 20:51 No comments: