Irom Sharmila's Court Appearance and Insensitivity of the State 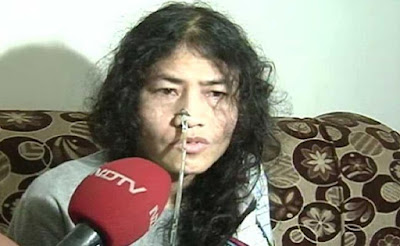 Irom Sharmila appeared before the metropolitan magistrate Akash Jain in the Patiala session court of Delhi on 5th and 6th June 2015. The Court was required to record statements of the witnesses that included the policemen, doctors along with another person who had recorded the protest of Jantar Mantar when Irom Sharmila was in Delhi in 2006.

In this case, the Delhi police had lodged FIR upon Irom Sharmila under section 309 of "Attempt to suicide'. Now as doctors did not come, the next date was given by the court with the hope that it will be the final hearing.

Save sharmila solidarity campaign (SSSC) members accompanied Irom Sharmila in the Court and were present in the court in solidarity. Campaign observed that though it was a judicial requirement, but such kind of hearings are mere unnecessarily harassment on the name of section 309 upon a human rights activist. It is a clear contradiction in Irom Sharmila’s case as while she is fighting for right to life, she is being charged with the allegation of taking away the right to life.

It is also observed that despite Irom Sharmila’s desire to meet Prime minister of India, prime minister office have not called for any meeting yet. It is her demand since long time that she is hopeful with democracy and she wants to meet Prime minister. Save Sharmila Soldarity Campaign believes that not calling a meeting with her is actually a denial of state to meet this crusader of non-violence. It is a time when Irom Sharmila has global supporters to raise voice for her cause, but despite all efforts and unparalleled sacrifice and struggle, Indian state is continuously ignoring and suppressing her. It is unfortunate that the government is giving priority of talks with those who are adopting violent ways, but it is continuously ignoring the non-violence.

Save Sharmila Solidarity Campaign is already involve in campaigning and will increase its activities from coming months to spread awareness and to advocate for the cause of Irom Sharmila.

SSSC also condemns the Manipur attack and the questioning of demand of repeal of AFSPA. It was reported and SSSC re-iterates the statement of Irom Sharmila who had condemned the Manipur attack. She regarded the killing of soldiers to be shocking and shameful. She has always condemned killing which is the reason for her protest. She regards killing, no matter by whom, as shameful and unacceptable. She had also said that this incident happened in a region which is under full control of AFSPA but still it happened. It shows that AFSPA has not been the solution.

SSSC agrees and fully supports her view. SSSC feels that such attacks are also failure of state itself as it seems that state has not even capable of protecting its own functionaries. Also, the fact remains that the common people are the sufferers of atrocities of both the state and anti-state groups. Through AFSPA, the state has been involved in performing extreme atrocities upon common people in past. SSSC believes that imposing hard laws like AFSPA (Armed Forces Special Powers Act) in civil areas are of no use and it has been used against people widely. There must be a strategy to remove AFSPA from all areas of North East and J&K as without it confidence building cannot be done. AFSPA is a failed law and it must go.