9 August 2016: Marking Solidarity
2.30 to 6.30 p.m.: at Jantar Mantar
We hope to reflect on our own politics and ethics... on freedom, justice, peace... democracy... with songs, poetry, music, drawings, ... Some may want to fast during the day, in solidarity with Irom Sharmila's long fast. We would light candles, before we leave, ... towards the future.

Today, Irom Sharmila makes a move towards freedom, by giving up her fast, which has lasted nearly 16 years. We feel deep respect for Irom Sharmila's non-violent struggle and her indomitable spirit, and support her decision to give up the fast. The struggle for peace and justice will continue.

The government of India promulgated the Armed Forces Special Powers Act (AFSPA), 1958; and subsequently imposed it in several parts of the country. People in Manipur, including Imas (`mothers': elderly women activists), Meira Paibis (women's groups, literally women holding `mashaals'), and many civil society groups, are struggling for AFSPA to be repealed, in the interests of peace and justice. They want good governance to be restored in the state. Experts argue that the Act perpetuates violation of fundamental democratic rights. It grants excessive powers, and impunity, to armed forces. Atrocities against ordinary citizens have been documented over the years.

In 2012, the Extra Judicial Execution Victim Families Association (EEVFAM) filed a PIL in the Supreme Court of India, alleging 1,528 fake encounters in Manipur since the 1980s. The Court ordered investigation into six cases, all of which were proved to be fake encounters: killing of innocent persons, by armed forces or police commandos. The Court has ruled that all the remaining cases must be thoroughly probed. It has questioned impunity, ruling that armed forces cannot use excessive force even in areas that come under AFSPA. 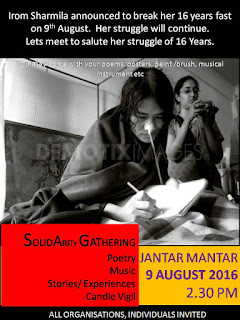 Humane, democratic solutions are needed to solve real problems faced by people; dialogue rather than repression. We stand in solidarity with democratic people's movements in Manipur, and elsewhere in the country -- being waged today by dalits, women, minorities, workers, people with disabilities, sexuality rights activists, and other marginalised sections. We -- ordinary people, students, teachers, feminists, activists -- care for democracy and human rights, peace and good governance, accountability and justice.  We feel that we are all responsible for helping to bring this about. We need to listen, learn, and together search for ways to move ahead, to actually resolve many very difficult situations.

We propose 9 August 2016, as a day of reflection: upon our own ethics and politics, upon freedom, justice, peace -- and hope. We will sit together that day, in quiet companionship. We will sit at Jantar Mantar -- from 2.30 to 6.30 p.m. Do join! We may sing some songs, read poetry, draw, sit in a circle, talk…; some may want to fast for the day, they could break their fast at 6. We would like to light candles as it gets dark. We are not planning this as a protest. Rather, a moment of quiet solidarity.

Please feel free to forward this to others who may be interesting in joining on the 9th. And, do bring along poetry, umbrella, mats, water, candle, posters, or anything else you'd like to share. This is a spontaneous action with no central organizing committee; your participation helps lend it meaning!