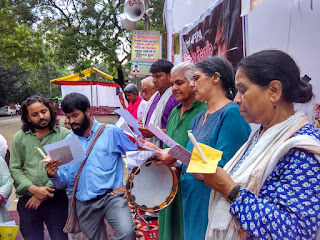 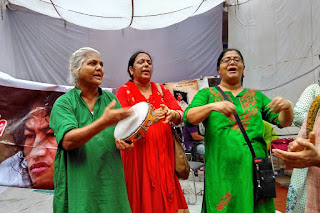 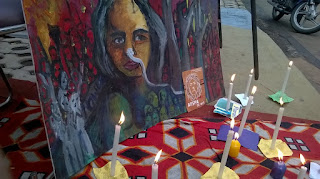 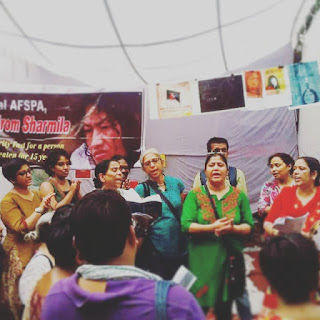 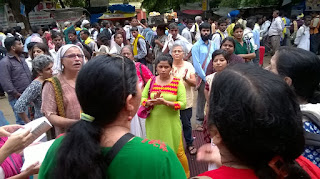 A solidarity action expressing deep respect for Irom Sharmila and supporting the ongoing struggle for justice by civil society in Manipur, was organized at Jantar Mantar, New Delhi, on 9 August. The solidarity event saw a large turn-out of over a hundred people, despite rainy weather.

The people gathered sang movement songs -- songs of struggle, such as `Tu zinda hai to zindagi ki jeet mein yakeen kar' and `Khamoshi todo vaqt aa gaya'. Several persons have been inspired by Sharmila over the years, and this was evident in the energy of the gathering. Some read out poems they have written about Sharmila, including Sagari Chhabra: "You resist violence by denying yourself taste/ Make haste, oh world, listen to this voice…."

The gathering noted that on 9 August 1942, the British government arrested Mahatma Gandhi and other leaders, and on 15 August 1942, it promulgated the Armed Forced Special Powers Ordinance, to quell the Quit India movement. In 1958, the Indian government promulgated the Armed Forces Special Powers Act (AFSPA), and subsequently imposed it in several parts of the country. People in Manipur, including human rights and women activists, are struggling for AFSPA to be repealed. The Act perpetuates violation of fundamental democratic rights by granting excessive powers, and impunity, to armed forces. Recently, the Supreme Court of India ruled that over 1,500 cases of alleged `fake encounters' in Manipur are to be thoroughly investigated; the first six cases investigated have all been proved to be fake encounters: killing of innocent persons, by armed forces or police commandos.

The people gathered agreed that "humane, democratic solutions are needed to solve real problems faced by people; dialogue rather than repression." Each person lit a candle or a diya, as a mark of the continuing struggle for justice, peace and democracy in Manipur and the rest of the country. It is not necessary for one person to take the struggle onto her shoulders: the burden is shared by others in civil society. The group noted, "We care for democracy, peace, good governance and justice, and feel that we are all responsible for helping to bring this about. We need to listen, learn, and together search for ways to move ahead, to actually resolve many very difficult situations."