GATHERING IN SOLIDARITY WITH IROM SHARMILA AND ANTIAFSPA

On 9th August, even as Irom Sharmila broke her sixteen-year long fast, peoplegathered in New Delhi in solidarity with her indomitable spirit. Academicians, students and human rights activists, gathered at JantarMantar, New Delhi, and expressedsolidarity through songs, poetry, talks, and a candle-light vigil. The mood was upbeat, with a large turn-out -- over a hundred people on a working day, despite rainy weather and short notice.

The group issued a statement which noted, 'Today, Irom Sharmila makes a move towards freedom, by giving up her fast, which has lasted nearly 16 years. We feel deep respect for Irom Sharmila's non-violent struggle, and support her decision to give up the fast. The struggle for peace and justice will continue." 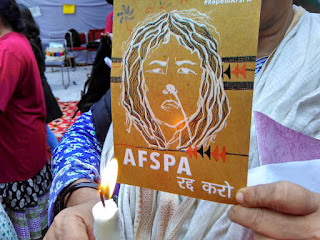 The solidarity event was a spontaneous initiative arising from heart-felt respect. The venue reflectedthis, filled as it was with posters, paintings and banners about the struggles by Irom Sharmila,MeiraPaibis (women's groups, literally women holding `mashaals'), and other civil society groups in Manipur. The event was initiated by two independent voluntary groups, Sampurna Trust and Save Sharmila Solidarity Campaign.

Many people have been inspired over the years by Sharmila's struggle, and this was evident in the energy of the gathering.The group sang movement songs with great feeling, attracting the attention of people from near-by protests and dharnas–songs of struggle such as `Issliyeraahsangharshki ham chune'; `Khamoshitodovaqtaagaya'; `Mil kechalo'; and several others. Some read out poems they have written for or about Sharmila, including writerSagariChhabra: "You resist violence by denying yourself taste/ Make haste, oh world, listen to this voice…."

In its statement, the group noted the historical significance of 9 August: on this day, in 1942, the British government arrested Mahatma Gandhi and other leaders, and on 15 August 1942, promulgated the Armed Forced Special Powers Ordinance, to quell the Quit India movement. Later -- in 1958 -- the Indian government promulgated the Armed Forces Special Powers Act (AFSPA), and subsequently imposed it in several parts of the country. AFSPA perpetuates violation of fundamental democratic rights by granting excessive powers, and impunity, to armed forces.

Atrocities against ordinary citizens have been documented over the years. Recently, the Supreme Court of India ruled that over 1,500 cases of alleged `fake encounters' in Manipur are to be thoroughly probed. The first six cases investigated by the Supreme Court have all proved to be fake encounters: innocent persons have been killed, by armed forces or police commandos. The Court has questioned impunity, ruling that armed forces cannot use excessive force even in areas that come under AFSPA.

The group asserted: `Humane, democratic solutions are needed to solve real problems faced by people; dialogue rather than repression. We stand in solidarity with democratic people's movements in Manipur, and elsewhere in the country being waged by dalits, minorities and other marginalised sections. We -- ordinary people-- care for democracyand human rights, peace and good governance, accountability and justice.  We feel that we are all responsible for helping bring this about. We need to listen, learn, and together search for ways to move ahead, to actually resolve many very difficult situations.'

While speaking at the gathering, senior social activistShanti di noted that Irom Sharmila's struggle is associated not only with AFSPA, but in fact with the conscience of all of us. We should be ready to speak out and protect democratic values, remaining alive to violations anywhere in the country.

Noted historian Uma Chakravarty said that the struggle against AFSPA and other such laws existed well before Irom Sharmila started her fast. She became well-known since she continued her struggle very strongly and peacefully. What Irom did is for the people and most importantly the cause. People are suffering atrocities in all areas where AFSPA is imposed including North East and Jammu & Kashmir.

Political scientist DeeptiMehrotra, author of the book Burning Bright: Irom Sharmila and the Struggle for Peace in Manipur, noted that AFSPA has failed as a counter-insurgency measure. To bring about peace, we must take responsibility collectively, rather than any one person bearing the burden. She proposed observing 9 August as a day of reflection upon our own ethics and politics, upon freedom, justice, peace -- and hope.

ShriSatyapal, senior Gandhian and trustee of Servants of Peoples Society,reiterated that we all support Irom Sharmila, and stated that the government'spolicy of ignorance has been exposed by her struggle. He warned the state that with its tools of ignorance and atrocities, democratic values will only become weak and produce dangerous results for the country.

Ravi Nitesh, Convener of Save Sharmila Solidarity Campaign (SSSC),noted that Sharmila's decision to enter electoral democracy reflects how determined she is. She is ready to change her form of struggle, in pursuit of the objective – a positive sign that activists can be quite flexible in their approach; although the government remains rigid. The Indian government has failed to respond to this unprecedented democratic and fully non-violent struggle.

Devika Mittal from SSSC expressed her opinion that whatever decision Sharmila takes, it is her life and she is definitely free to live it in her own way. Her struggle has worked as a torch bearer for many of us and we believe that the light of hope that she has shown us will continue through collective struggle.

Vani from Saheli informed the gathering that several activists have launched a global women's signature campaign expressing solidarity for Sharmila and demanding repeal of AFSPA. ShrutiAchesh from SSSC said that our struggle for justice and peace must go forward and we must try to meet every month to discuss the strategies to take this movement further.

Social anthropologist Felix Padel noted that people across the world are today struggling against militarization and destructive development, and expressing solidarity with all these, he sang `Blowingwith the wind', a song of sensitive, intelligent protest.

As darkness fell, each person in the gathering lit a candle or diya, as a mark of their contribution to carrying on the struggle for justice, peace and democracy in Manipur and the rest of the country. Everybody sang 'Tuzindahaitohzindagikijeetpeyaqeenkar', a movement song expressing deep faith in the forces of life and hope.

A Sister Event – in Hyderabad

Activists in Hyderabad too held a solidarity event on 9th August, at Lamakaan. The Delhi and Hyderabad teams had loosely coordinatedthe planning of both events.

Forum for Social Justice, Hyderabad organized a solidarity meet to mark the historic moment.There were about thirty odd people in Lamakaan yesterday. It was a collaborative effort wherefour people read out a brief introduction to Manipur's history, Sharmila, the Meira Paibis' protests, AFSPA etc.

Six people -- activists, PhD scholars and researchers -- recited poems from the North East in English, including a poem by Irom Sharmila. Vasudha Nagraj had gone through the 180-pages Supreme Court judgment (on the PIL by EEVFAM) and culled out significant points, which she read out. A couple of people spoke, including Satyavati, who runs Bhumika, a feminist collective and a magazine in Telugu; who had met Irom Sharmila. Vimala, an activist, sang songs in Telugu about continuing a struggle against repression and violence. A photo essay on Irom Sharmila by Jansen-Lonnquist, was screened to the background music of Dylan's 'Blowing in the wind'."

This song, coincidentally featured in both solidarity events ,is a passionate indictment of human apathy, and assertion of the necessity of empathy and empathetic action:

"How many years must the cannon-balls fly

Before they are finally banned?

…How many times can a man turn his head

And pretend that he just doesn't see?

…How many deaths must it take before he knows

Too many people have died?"

Credit for the feature: Save Sharmila Solidarity Campaign &Sampurna Trust